This year, Bobby is on the ballots, for the second time, for the Hall of Fame election, where Gary Sheffield and Sammy Sosa, his nemeses during his career, will be reunited with him, not counting Larry Walker who was already elected. Let’s also pay attention in this exercise to Vladimir Guerrero who is already in Cooperstown, as will be in a few years the little samurai, Ichiro Suzuki, a more than sure member of The Hall of Fame.

This presents an opportunity to create favorable conditions. It is possible with little effort to highlight the outstanding performance of Bob Abreu, who has nothing to envy to any Rightfielder of his time. The current analysis allows us to rescue everything that people were not able to see.

On the other hand there is the hit value. Due to the fact that the more bases you reach with a hit, the probability of a run increases, that’s why wOBA is such an important indicator. The one from Philadelphia had a wOBA of .378 while the one from Seattle had .328 and an OPS of .870 against .757. Every time Abreu stood at the plate, the chance that someone on his team (including him) would reach the plate was much higher.

Bobby also didn’t hit a hefty sum of Home Runs (the most beloved statistic for better or worse in baseball) the way Sammy Sosa did. However, even with Sosa’s 609 home runs, along with his doubles, triples and walks; Abreu with 288 home runs, and the rest of his stats, had the same OPS +, 128. This is something that seems amazing and thanks to the new type of analysis, it would have been difficult at that time that a 600+ home run player would be equaled to one with 288. Can you imagine a 28-homer player being given the MVP above one with 60 in a season? That’s viable when the player is viewed holistically.

Bob Abreu and Vladimir Guerrero were antagonistic at the plate. Vlad swung at 58.3% of the pitches he saw in his career, Abreu did to 34.8%.

These two simple numbers define how each one was on the plate. Guerrero known for his aggressiveness and good contact only struck out 985 times throughout his career, an enviable amount even for Ichiro. The opposite of this is Abreu, with an excellent command of the area, he struck out more frequently, but he also managed to reach base via base on balls a much greater number of times. Abreu walked twice as many times as Guerrero (1476-737).

Moving from cumulative standard statistics to the standard averages, we have on one hand Vladimir Guerrero, who had a higher batting average than the rest of the group and greater slugging (.553) that denotes better results with extra base hits, even higher than  Sosa’s. The other lines favor the Venezuelan. Abreu put the ball in play more times (.339 BABIP) and the OBP of .395 corroborates that he was also superior in the on-base area, as we explained with the accumulated stat of walks.

Looking at it from the perspective of advanced statistics, wOBA would be a fairer way of evaluating the players than batting average and OBP, here he was only behind Guerrero. In terms of runs created (wRC), which is a better way to evaluate the player than runs scored and RBIs (which although they have their value, are statistics of opportunity), Abreu had a higher number of runs created than the sluggers we compared in the box and many other “famous” players who are not there.

In terms of base running, both, stealing bases and gaining extra bases when hitting, Abreu is only below Ichiro, as indicated by his BsR. Ichiro had the most stolen bases, but Abreu had the most extra bases.

With the glove, Ichiro is one of the best defensive Rightfielders in history, the 10 gold gloves he won were totally deserved. Abreu, was notable for the intelligence of discerning what to do in each play which left him with an excellent fielding percentage, and even more so because of his arm. Thanks to the rArm statistic, Abreu is known to be one of the best avoiding hitters to win extra bases; here, he ranks 22nd all-time among Right Fields.

If we include all the offensive categories to summarize the career of this group, the  Venezuelan, according to bWAR with 60.0, had a career as good as Vladimir Guerrero (59.4), Sammy Sosa (58.6) or Ichiro (59.3).

All the above can say as much or as little depending on who reads it, but maybe you, just like me, are one of those who think a player should be defined by the value and contribution he had for his team. If that is so, according to the WPA statistic that indicates how much a player increased the probability that his team wins games, in the last 28 years Bob is in position 13, among 1404 players from that period, who contributed the most to his team wins.

That makes him not only above the players we have been comparing him to, but also over Hall of Famers Edgar Martinez, Ken Griffey Jr and Derek Jeter himself.

Reviewing Abreu’s numbers cannot be done with favoritism for just one offensive category. If a group of people only likes the home runs or the batting average, why is the importance of the five tools preached, if they only have one?… Like Rickey Henderson!

Consolidating statistics, in 150 years of Baseball in which more than 4,000 position players have passed through the batting box, they indicate that Bobby is the only player in history with two seasons of 30 homers, 30 stolen bases and 45 doubles. He’s the second player with the most 20-homer, 20-SBs. In addition, he had 8 seasons of 170 hits and 20 stolen bases; Ricky Henderson only had 2.

More notable, since 1871 there have been 19,498 players (positional or not) and the list of players with at least 250 home runs, 500 doubles, 400 stolen bases who have been able to maintain a batting average of at least .290 throughout their career is as long as just Barry Bonds and Bobby Abreu.

Ancestors wisely say “all roads lead to Rome.” What has happened to Bob is that he has done the same without too much noise and in the least exciting way for the home run fan. But that does not make Abreu less than others, he just made it different.

Bill James has stated “… on-base percentage is the most important of the basic batting categories, so it’s very easy for me.” Bob Abreu was underrated for being a genius in baseball’s top category, according to James who added, “And since the writers didn’t recognize his value at the time, we can’t recognize his value now. It makes a lot of sense (irony) ”. That was answering to a fan saying that Bob Abreu does not have the merits to be in the Hall of Fame since he was never Top-10 in MVP voting.

“El Come Dulce” in an interview with the Phillapelphia Inquirer when he was told about having been a bit overshadowed by other figures, he stated “When I played I did it against Vladimir (talented) and other Outfielders like Larry Walker, Gary Sheffield and others, that’s why I think I’m not there (among the names that are often named) but now I think people begin to understand all those numbers together and what did I do “

Bobby himself has the answer to his case: the holistic vision that the new way of analysis rescues. If the numbers are not seen together then why do some preachers talk about the five tools when they only pay attention to one or two? Is it just a story that they throw us while we are playing little league?

All this evidences that Bob has a legitimate case for the Hall of Fame, he knows it, you know it and the greatest irony is that those that did not make him more famous now deny him being in the Hall of Fame… That’s the way it is. 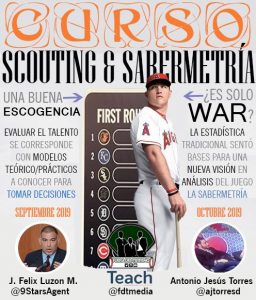